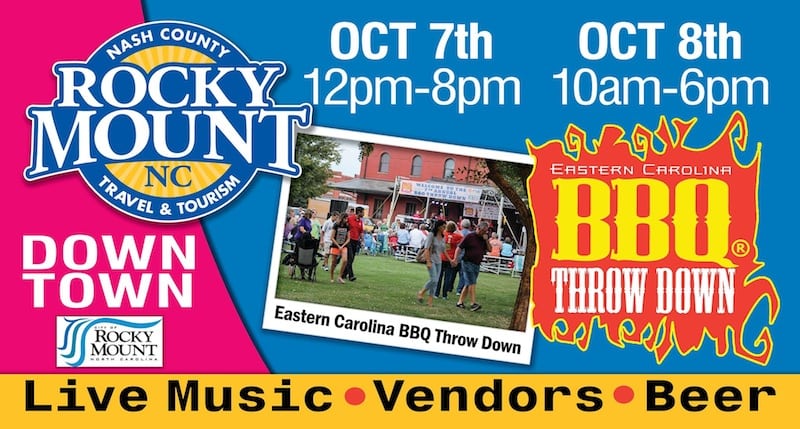 One of the most anticipated and for sure tastiest annual events on the Town of Rocky Mount calendar will be returning to town for a “smokin’” good time, as just a few minutes from the Belmont Lake Preserve NC golf community, the 9th Annual Eastern Carolina BBQ Throwdown takes place on Friday and Saturday, October 7-8.

The Eastern Carolina BBQ Throwdown festivities kick off this year on Friday at noon, at 101 Coastline Street in Downtown Rocky Mount, directly in front of the Helen P. Gay Historic Rocky Mount Train Station. And the “delicious” fun on opening day goes until 8:00 p.m. Saturday morning The “Throw Down” continues and swings into full effect as will be evident by the incredible smell wafting through town from the countless BBQ pros plying their craft from 10:00 a.m until 6:00 p.m.

For those who have not yet had a “taste” of the Eastern Carolina BBQ Throwdown, it is a professional cooking competition based on the Kansas City Barbeque Society’s (KCBS) official categories, which are chicken, pork ribs, pork brisket, and beef brisket. Awards are given out annually for the Grand Champion, Reserved Grand Champion, and the People’s Choice Award, decided upon by the attendees of the tops in Fall Events in Rocky Mount. Additionally, prizes to include cash awards, trophies, and plaques will be given out to the top ten finishers in each of the above categories.

Returning for the second consecutive years on the heels of its success at last year’s Eastern Carolina BBQ Throwdown will be the 2nd Annual Home Brew Competition, as once again, local beer enthusiasts and brewers will compete on Saturday. Each entrant in this competition may submit any style beer of their choosing, and each will be judged in different categories based upon the style they enter. If the entry does not fit into one of the specific categories they still are eligible for the overall “Best in the East” award that will awarded by a panel of judges representing this events sponsor from Rocky Mount Mills.

Although the Eastern Carolina BBQ Throwdown begins at noon on Friday, and the judging will commence throughout the two-day festival, there will also be other great food and entertainment ongoing throughout. The “Kick Off Party and Concert” has become almost as much of a tradition as the ribs, chicken, brisket, and other delicious food, with great live, local music being played throughout the day. Always a family friendly event, there will also be an assortment of vendors, and kid specific activities throughout the weekend as well

“Embrace the Roar of the Crowd,” Charlotte Hornets Basketball Looks for...