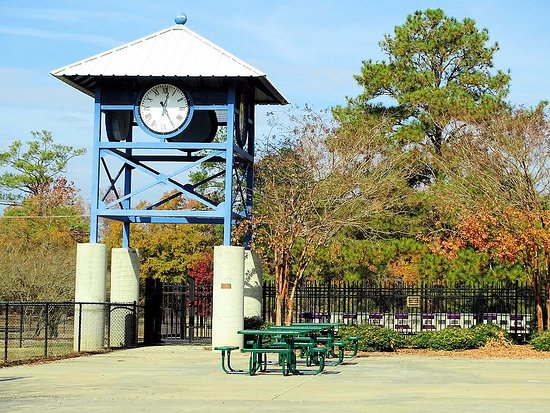 This article continues in our series to support the move to new homes in Rocky Mount at Belmont Lake Preserve. Similarly, we detail Rocky Mount NC Outdoor Living options. Certainly, one of those options is the “City’s Main Park,” Sunset Park. 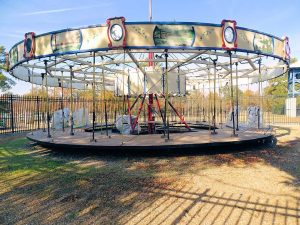 The  “County Fair” style carousel has become one of the city’s most iconic landmarks.

“All Aboard” for the Rocky Mount Parks

The next in our series on Rocky Mount NC Outdoor Living should come as no surprise to residents. Any longtime resident can attest that at some point all youths ride the carousel at Sunset Park. The official Rocky Mount website, calls it the “City’s Main Park.” The 25-acre, Sunset Park is on Taylor Drive and River Drive beside the Tar River just off of Sunset Avenue.

The carousel itself sets Sunset Park apart from the other Rocky Mount Parks. The city’s website explains the park actually has quite a history of its own. “The circa 1920 Herschell-Spillman “County Fair” style carousel was bought for the City of Rocky Mount in 1952 by the Rocky Mount Civitan Club.” It goes on to explain that “The Carousel was severely damaged in the flood of 1999 and required extensive restoration which was completed by Carousel Magic of Mansfield, Ohio. Renovated rounding boards were added to include paintings of images found on 1920’s postcards depicting Rocky Mount landmarks and activities of that time.” 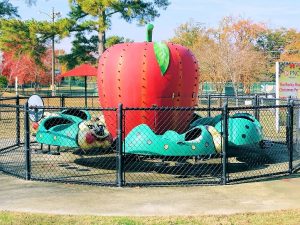 The “ladybug ride” at Sunset Park has long been a favorite for generations of Rocky Mount youngsters.

In addition to the iconic carousel, Sunset is unique among the Rocky Mount Parks for a few other reasons as well. The obvious here would be the train, a miniature Model G-16 Train. The train was open for public use in 1952. It holds 36 passengers and travels at a speed of 8 miles an hour.

On top of these two rides, there is also a Spray Ground that helps keep the kids cool on hot, summer days. The park also offers on-site concessions. Thes include offering popcorn, ice cream, snow cones, and other childhood favorites. The “main park” among the Rocky Mount Parks also boasts another “kiddie-go-round, ” the ladybug ride. There is also a disc golf course and two lighted basketball courts. Likewise, a boat ramp and four picnic shelters are available at Sunset Park. Other amenities include eleven lighted tennis courts and a little league baseball field. 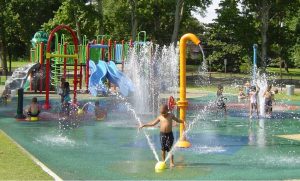 The “Spray Ground” at Sunset Park offers kids a chance to beat the summer heat and cool off with friends.

“A Little Bit of Everything for Most Everybody”

An actual Rocky Mount resident’s 5-star review of the Park at TripAdvisor may best sum up why Sunset is the “city’s main park.”Not a bad choice to relax, walk around the lake, have the kids ride the train or merry go round,” he continued. “Board Sports, boat landing in the Tar, tennis, spray park in summer, picnic shelters by the river, baseball field or basketball courts….a little bit of everything for most everybody.” In addition, this reviewer raved about how well maintained and patrolled Sunset Park is.

Sunset Park is one of many places you can expand your “lifestyle redefined,” at Belmont Lake Preserve. Likewise, it is just one of many in our series of Rocky Mount Parks.

Rocky Mount NC Parks : “A Great Place to Find Some Country…in the...