Rocky Mount NC Economic Development is currently getting recognition statewide. Many are calling the city one that is “on the rise.” The recognition, accolades, and most importantly growth in the city of Rocky Mount will no question continue, as the ground was broken on the CSX “Carolina Connector” project yesterday.

A “Connector” for Jobs and Economy; Locally and Statewide 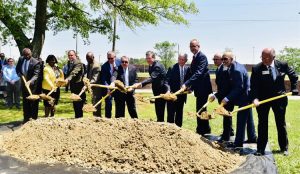 NC Governor, Roy Cooper, was among the dignitaries at the  “groundbreaking” of the CSX Carolina Connector yesterday.

The CSX “Carolina Connector” project will indirectly result in the creation of upwards of 1,300 jobs. The “Connector” is estimated as a $160 million project on 330-acres of land. In addition to the jobs locally, it should also assist greatly in the continued growing Rocky Mount Economic Development.

Many dignitaries attended the “groundbreaking,” including CSX CEO, James Foote. “CSX appreciates the partnership it has developed with N.C. Department of Transportation,” Foote said. “We commend the state for its leadership in making this project possible.” He continued, “CSX is excited to expand its network in Rocky Mount and believes CCX will be a catalyst for economic growth and development in the eastern North Carolina region.”

A time when the Rocky Mount NC Economic Development picture was not nearly as rich and thriving was July of 2016. The prospect of what was being called a $270 million project was met with much excitement.  A possible number of jobs reported at anywhere from 1,500-1,800 was music to the ears of Rocky Mount area residents.

The, it became official on July 19, 2016, when CSX announced that Rocky Mount would be the home for the Carolina Connector intermodal terminal.

During a press conference announcing that news to the Rocky Mount community, then-NC governor Pat McCrory added to the hope of the local community, speaking the following praise of what this meant to both Rocky Mount and the entire state.

The Governor Promises a “Game Changer”

“This historic project is part of our 25-year vision for transportation because it facilitates the efficient and cost-effective movement of goods, which is critical for job creation and economic growth.”Governor McCrory added, “The Carolina Connector will be a game-changer for our state’s economy, supporting North Carolina’s agriculture, ports, and position as the Southeast’s number one state for manufacturing jobs.”

Obviously, this news brought great optimism, as city residents knew this could be a major step in the right direction. Rocky Mount Economic Development was not alone in NC as far as seeing some more difficult times, as most still reeled somewhat from the 2011 recession.

Hopeful to “Connect” to a Stronger Employment Rate and Stable Population

The city of Rocky Mount had seen the ill-effects of said recession. They had not fully recovered by the time of the 2016 CSX announcement. According to the US Bureau of Labor Statistics, the city’s unemployment rate reached as high as 14.7 percent during that time.

Consequently, with fewer jobs and less money, comes fewer people. Thus, Rocky Mount was also seeing a steady population decline during these more difficult times as well. There was a more than five percent drop in population, from 2012-2016 in Rocky Mount according to World Population Review.

President of the Rocky Mount Chamber of Commerce, David Farris looked back on the Rocky Mount economy at that time.  “The great recession cost us a lot,” recalled Farris. “A lot of businesses closed. As recently as five years ago, we were taking some body blows.”

So the great news of CSX coming into the area brings great optimism. Many hoped that it was just a sign of things to come in the turn around of the local economy. However, before ever officially “connecting”, it appeared CSX and Rocky Mount would be “disconnected.”

With an announcement made by CSX on November 3, 2017, a “company-wide strategic shift” will be the reason given that the company decides against Rocky Mount. Originally set to begin construction in 2018, it would seem the CSX project in Rocky Mount was no more. In contrast to these reports and statements, though, were some local officials and residents working hard to still bring CSX to Rocky Mount.

The story of CSX in Rocky Mount continues in our next article with the “rebirth” of the Carolina Connector project. This “new” project that will be discussed is the one that led to the project becoming a reality. Moving forward is a major “feather in the cap” in Rocky Mount NC Economic Development and those who made it happen.

The Main Course at Belmont is Premier Fine Dining in Rocky Mount Restaurant...

Rocky Mount NC Parks : “A Great Place to Find Some Country…in the...
Scroll to top