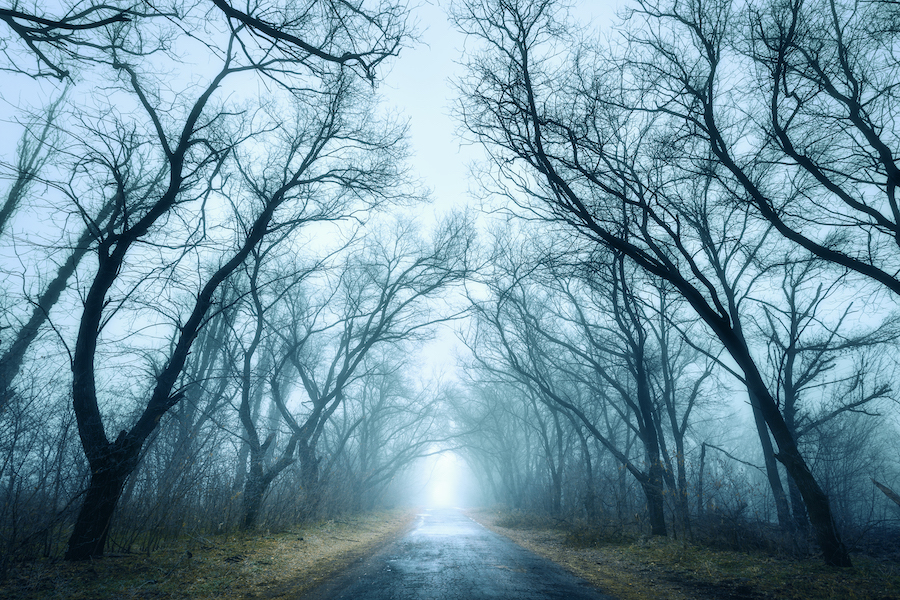 With the Halloween holiday approaching, the nights always seem to be a little darker. The strange noises seem a little closer. What’s that you say? You’re not afraid? Well, that’s a good thing, because in the spirit of Halloween we have a list of seven Haunted Roads in North Carolina that you will surely want to explore. Since you’re not afraid and all….

Seriously though, we all love a good scare around this time of year, don’t we? Corn mazes, haunted houses, and countless other “terror trails” fill up every fall with folks looking for a reason to scream. But what about when it isn’t an attraction? What about when there is no explanation for what appears to be some type of paranormal being or activity? What happens when it’s just you and whoever is alongside traveling routes that hundreds have claimed some type of haunted experiences? Well, if you still are looking for that “scare,” grab your keys, your courage, and head on out to these Haunted Roads in North Carolina.

Oh, and good luck making it back…

The site of an unexplainable murder of an innocent young girl sets the stage for the first of our Haunted Roads in North Carolina. As “legend and lore” would have it, this poor girl not only was killed here, but it’s said her heart was cut from her body and thrown from this very bridge by the killer.

How would anyone know this for sure, you may ask? Well, it is simple, the girls’ heart still beats to this day at the site. Not possible, you say? Well, as you approach these Haunted Roads in North Carolina explain to us then as you begin hearing the faint sound of her heartbeat? That could be anything, you may think at first until you actually arrive at the bridge. It has been said that the heartbeat here is so loud that people have had to leave the site due to the sound.

Here we have another of our Haunted Roads of North Carolina that was born from legend…or is it? Some claim that Gravity Hill is simply an illusion. But you can decide for yourself with a visit.

So, legend has it that one evening on Richfield Road, a young mother and child stalled in. their car. Then when the mother got out to push the vehicle, an oncoming truck struck and killed both her and the child. Here’s where this one gets spooky. It is said today that if you drive to the bottom of this exact hill and put your car in neutral, you will slowly move up the hill. Adding to the mystique is that it also said that before you put the car in neutral if you put baby powder on the hood of your car, once to the hilltop, there will be handprints left in the powder.

Still, wearing all that bravery and courage? Ok, just checking, because if history tells us anything the next stop on our list of Haunted Roads in North Carolina could leave you with some type of car trouble, or even worse! Helen’s Bridge sets at Beaucatcher Mountain in Asheville. The unexplainable occurrences at this spot are as incredible as they are hard to explain.

So, the story here is that after Helen’s daughter died in a fire, the grief-stricken mother hung herself from this very bridge. Since that fateful incident, the strange occurrences on this stop of our Haunted Roads in North Carolina are almost too plentiful to dismiss. First, there are countless reports of “Helen” in a long gown asking passers. by if they know where her daughter is. At least as strange is the amazing number of car problems reported from those passing by this point. Whether a dead battery at the site or other car issues within the next few days, there has been a long history of auto failures following these visits. Random sightings of monster-like figures and even unexplained slaps, punches, and scratches have been reported at this site, as well.

Ready for “Trick-or-Treating” yet, or should we continue on our tour of Haunted Roads in North Carolina?

So, if strange occurrences at the sites of murders and other deaths don’t have you ready to head to the safety of your well-lit home, lets continue. Next up we go to what I’m not sure can still be “Man’s Best Friend!”

The Demon Dog of Valle Crucis

Ok, just reading that headline has got to make you skeptical. But, make no mistake about its Valle Crucis lays claim to what may seem the strangest, but also possibly the most terrifying entry on our list.

This next of our Haunted Roads in North Carolina is exactly what it says. A “demon dog” comes from behind a gravestone as you pass St John’s Episcopal Church on this path. Complete with glowing eyes and yellow teeth, it is said no matter what speed you travel at the canine continues its chase.

In our fifth tale about Haunted Roads in North Carolina, we have a story of a young hitchhiker gone bad. While the name Lydia has come into question over the years, the tale remains regardless.

What happened here is a young girl dies on this stretch in Jamestown in the 1920’s. She was supposedly in a car accident while on her way to her high school prom. Legend has it that still today, when you drive past this bridge on a dark, rainy night that is similar to the one of the occurance you will see a phantom hitchhiker, looking for a ride.

There are numerous tales regarding the next entry of our Haunted Roads in North Carolina. No matter which you’ve heard, it has become a Halloween-time tradition locally to travel this spooky, dark path.

Ranging from murdering his daughter, killing his wife and baby girl, or even as far as claiming the man practiced sacrifices and satanic rituals the horrifying legend of Edward Payne is one many are familiar with. Whatever you like to believe, it is undeniable that a very eerie and strange feeling is in the air when you drive down Payne Road, and it is suggested that you do not travel this road alone!

This is not so much a part of Haunted Roads in North Carolina as it is a haunted. “alley way,” but either way, the lore surrounding this location in Asheville merits inclusion on this listing.

The “ghost” of Chicken Alley is supposedly Dr. Jamie Smith. The story goes that Dr. Smith was stabbed in the heart at this spot after accidentally walking into a bar brawl that had spilled to the alley from nearby Broadway’s Tavern. In his defense, it is said that now, some 100-plus years later, the “doctor” still has his fashion sense as it said when this “being” can be seen he still is wearing his long, black coat and wide-brimmed hat. Likewise, legend has it that you can even hear Dr. Smith tapping his cane against the street as he shuffles through.

Are the Haunted Roads of North Carolina Real or Make Believe…That’s for You to Decide?

These seven locations, the Haunted Roads of North Carolina, are all ones that get regular visits in their local areas. Many of these get visitors state-wide from across NC. With the Halloween season approaching, there are many haunted houses and trails up and running. So, why not take a ride out and visit “the real thing?” That is if you are not too afraid…

For more information on your location and all other things at BLP, visit belmontlakepreserve.com.

North Carolina State University: Staying Ahead of “The Pack” for 130 Ye...

North Carolina Wesleyan College: Not Just a Neighbor When it’s All in the...
Scroll to top