Nothing says “summer” like the sound of the crack of the bat, the smell of the freshly cut outfield grass, and the taste of a delicious hot dog and an icy beverage under the sun at Five County Stadium. Located in Zebulon, just 35 minutes from Belmont Lake Preserve, Carolina Mudcats Baseball home games are played throughout the summer months and offers a throwback to a simpler times when family’s could enjoy a warm night at the ballpark and “root, root, root for the home team.” 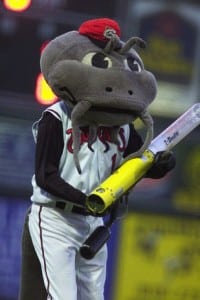 Team mascot, “Muddy the Mudcat” is always popular with the kids at all Mudcats home games.

Currently the Carolina Mudcats baseball team is the Single-A minor league affiliate of Major League Baseball’s (MLB) Atlanta Braves. The team originally moved to its current location in Zebulon on July 3, 1991 after their initial move to North Carolina had a stop over in Wilson while the construction of Five County Stadium was finished. The Carolina Mudcats Baseball franchise was purchased in 1988 by team owner Steve Bryant, who then moved the team from Columbus, Georgia to the “Tar Heel State” in 1990.

Although currently affiliated with the Braves, the Carolina Mudcats Baseball franchise has played under several major league organizations’ banner since its formation, with countless future all-stars spending time on the diamond at Five County Stadium. The Carolina Mudcats Baseball team had their first taste of a championship while playing in the Pittsburgh Pirates organization, taking the 1995 Southern League Championship. That title winning squad was led by several time National League All-Star catcher Jason Kendall who was named the 1995 Southern League Most Valuable Player. The first Mudcats team to play in Zebulon in 1991 saw their pitching staff anchored by future World Champion and knuckleball expert, Tim Wakefield who posted a league laeding 15 wins that year.

The Carolina Mudcats Baseball team got there next Southern League title in 2003 after switching to the Florida Marlins orginization. This team was loaded with future MLB stars, including Miguel Cabrera, Adrian Gonzalez, Dontrelle Willis, and Josh Beckett. Other notable superstars that have played at Five County Stadium during the 25 years of its existence are Hall of Famer, Ken Griffey, Jr., New York Yankees star, Alex Rodriguez, Jay Buhner, Edgar Martinez, Joey Cora, who all were a part of a Seattle Mariners team that played in a 1997 exhibition game against the Southern League all stars at Five County Stadium.

Maybe the most notable star to oppose the Carolina Mudcats Baseball team on their home Zebulon turf was a Hall of Famer in a different sport, as the legendary Michael Jordan, who came in as a part of the Birmingham Bulls in 1994 during the season that he took a one year hiatus from the National Basketball Association (NBA) to give pro baseball a try. 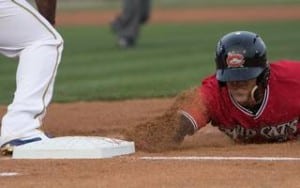 The future stars of Major League Baseball are on display all summer long at Five County Stadium.

The bright future of the stars of the current Carolina Mudcats Baseball stars is as bright as the hot, summer sun that beats down throughout the summer months of North Carolina. The Mudcats organization still lives by the origina mantra of Mudcats owner, Steve Bryant, that he stated in 1991 states, that says the team looks to “excel in the Magic of Baseball, provide a positive atmosphere for families to escape to a sparkling venue that provides creature comforts that enhance quality time together. ”

For more information on Carolina Mudcats Baseball including their complete schedule, weekly specials at the ball park, and ticket information, visit their website at carolinamudcats.com. 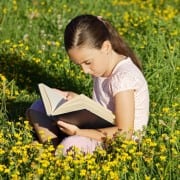 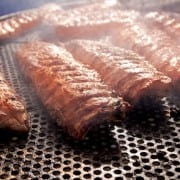