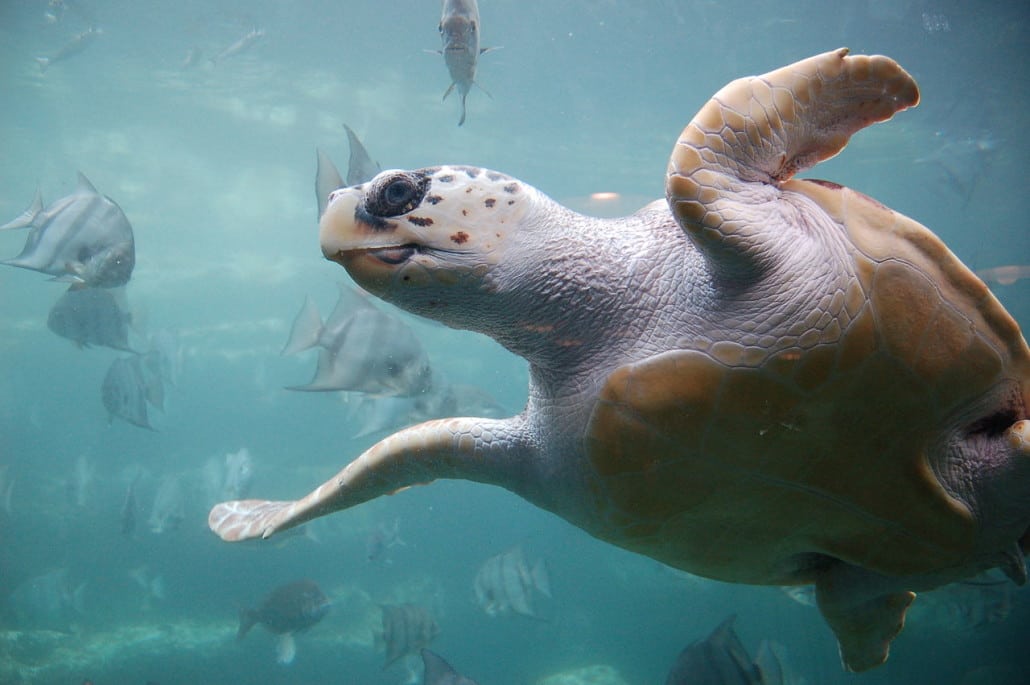 Every year a cycle of life occurs on the Cape Hatteras National Seashore when female sea turtles return to the beaches where they were born to lay the next generation. The sea turtle emerges from the ocean to make her way ponderously up the beach where, after crawling to a place she deems appropriate, she digs a hole with her back flippers to lay her eggs. Once she covers the nest, this majestic reptile slowly makes her way back to the ocean using light cues. The nesting process can take between 1-3 hours to complete. A couple of months later, the nest seems to boil over as tiny turtles struggle out of their shells, out of their nest, and, out across a beach full of hazards by the light of the moon to their new home – the ocean. 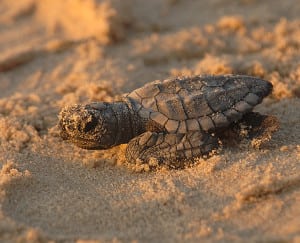 Sea turtles, some of the largest living reptiles seen on the Cape Hatteras National Seashore are long-lived, cold-blooded, air breathing, migratory, and spend almost their entire lives in the sea. They range in size from the smallest species weighing 75-100 pounds to the largest species weighing almost 2,000 pounds. Visitors can tell the difference between a land or pond turtle and a sea turtle by their front limbs. Sea turtles have flippers, whereas land and pond turtles have feet with claws. 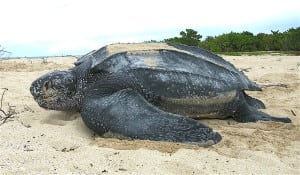 There are five species of sea turtles found along the Cape Hatteras National Seashore – the leatherback, hawksbill (rarely seen), Kemp’s ridley, loggerhead and green. While all five of these sea turtle species can be found in Seashore waters throughout the year, it is the female loggerhead and green turtles—and occasional leatherback and Kemp’s ridley turtles—that nest on these beaches, which are considered to be the extreme northern limits of their nesting grounds.

Every day, trained volunteers walk the beaches not only at the Cape Hatteras National Seashore on North Carolina’s 320-mile coastline with an eye to turtle activity. These citizen scientists takes steps to protect nests from predators, stand by to assist when the hatchlings emerge en masse and head to the sea, and scour the strand for turtles in distress. The North Carolina Wildlife Resources Commission oversees their work through community programs with a combined membership of 1,200 to 1,500 volunteers.

Visitors can use encounters with turtle watchers as learning opportunities. Public “turtle talk” events are also offered by local organizations, including:

Programs are also offered by:

Beachgoers can help the cause with measures as simple as picking up trash and keeping light to a minimum. Learn more about protecting turtles on the Cape Hatteras National Seashore and everywhere else at seaturtle.org.